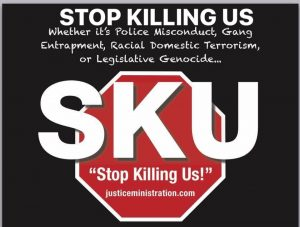 
PHILADELPHIA, PA (USA) —Since 2017, Jamal Johnson, a 62-year old United States Marine Corps disabled veteran from Germantown in Philadelphia, has marched 125-miles from Philadelphia to the U.S. Justice Department and the Congressional Black Caucus in Washington D.C to draw attention to gun violence and police brutality ,and seek possible further legislation to address both. On Wednesday, August 7, 2019 at 12:00 P.M., Mr. Johnson will embark  upon his 125-mile journey to Washington, D.C. from the House of Umoja, Inc. (www.houseofumoja.net) at 5625 West Master Street in Philadelphia, Pennsylvania.   An alumni of the House of Umoja, Inc., both Mr. Johnson and his brother who were not gang members, were among the over 3,000 adolescent males nurtured by the House of Umoja, Inc.   Established in 1968 by Queen Mother Falaka Fattah and her husband the late Mr. David Fattah, the House of Umoja, Inc. is an internationally acclaimed organization with a 51-year successful track record of positively transforming the lives of and working with children and youths throughout the City of Philadelphia.


Mr. Johnson has been an advocate against injustice for his entire life. Following his retirement from the Marines for disability and retirement from the United States Postal Service, Johnson has traveled across the country to where he’s been most needed: supporting the water protectors at Standing Rock, Black Lives Matter activists in Ferguson, Missouri, and participating in several long-term marches, including the 1,000 mile march with NAACP’s Journey for Justice, the 140 miles from Philadelphia to D.C with the nonpartisan movement to get big money out politics, Democracy Spring. In 2019 he has made numerous visits to the U.S - Mexico border to provide direct aid to migrants.


Noting that the killing of Bankroll Gambino on July 28, 2019  was the 187th killing so far in Philadelphia, an increase of 6 percent since last year, Mr. Johnson stated:


“In some parts of the country, this kind of continued mass shootings would be considered a national emergency. In Philadelphia, PA Attorney General Josh Shapiro called the recent massacre in Elmwood and the death of Gambino “everyday” gun violence. The deaths in our community needs to be addressed and stopped.”


Johnson is advocating for congressional legislation to address both the rampant gun violence and ongoing police brutality in our nation. At the conclusion of the march, Johnson will hold a press conference on August 28th.
at August 06, 2019

This article is genuinely a fastidious one iit helps new
net users, who are wishing inn favor of blogging.

Greaate post. Keep writing such kind of information on your blog.

Im really impressed bby youur site.
Hey there, You have done a great job. I will certainly digg
it and individually recommend too my friends. I am confident they will be benefited
from this website.

It's in reality a geeat and helpful piece of info.
I am happy that you shared this helpful informaton with
us. Please stay uus informed like this. Thanks for sharing.

Thanks too my father who informed mme onn the topic of this
website, this webpage is really awesome.

Under the leadership of its National Coordinator, Mr. Rhoel Mendoza, the Philippines launched its inaugural observance of Intern...