THOSE WHO LOVE PRISONERS AND THOSE WHO PRISONERS LOVE: MS. JUDITH TRUSTONE 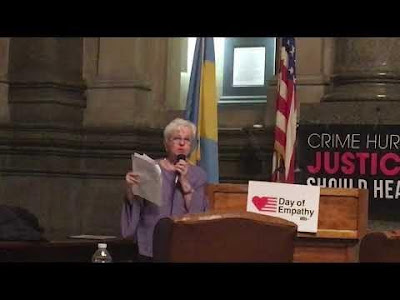 Gale Muhammad was driving along the New Jersey Turnpike on her way to visit prisoners one Fourth of July morning. Listening to a jazz station, she almost drove off the road when a repeat of a pre-recorded interview with me about prisons came on. She scrambled to get a pen and something to write my contact information on. She was successful and she called me later that day, over ten years ago. Our perceptions of our criminal justice system were similar, surprising her, for she hadn’t ever heard a white person with that perspective--a broken, brutal system that destroys spirits. And families. Gale has devoted more than a decade to advocating for families of those behind bars, presented state and national testimony, as together we developed a concept of  a holistic re-entry from prison program that one state grant writer said was “the missing piece in the re-entry world.” We were too ahead of our time to get funded then.


We finally met in person in a delightful way after many telephone conversations.  She invited me to an event that was being held by  the organization she started, Women Who Never Give Up (www.wwng.org).    She offered me a table for Sagewriters (www.sagewriters.org), which published books of literary and social merit by prisoners, started in my creative writing group at SCI Grateford in Graterford, Pennsylvania which is now SCI Phoenix.


I’d never seen her and when I scanned the room, I didn’t see anyone who looked like I thought I’d imagine she’d look based on our many conversations. As I was setting up the book display, I saw a side door open and in she walked, a spirited Black woman who caught my eye in recognition. The band had started playing, and we spontaneously danced across the large room and hugged and laughed. From that day over ten years ago, we’ve been friends and colleagues, with occasional spats.


The inspiration for her work was the late Tariq Mohammad, a man she’d known before he went to prison for a drug-related offense. She’d been visiting him and writing to him as a friend.


After getting a flu shot which had as a preservative, Thimerisol (mercury which is why so many get sick from the shots) and which caused her to be stricken with Guillane-Barre Syndrome and ended up in the hospital for months, unable to walk.


As a beautiful example of the Kind Minds of some prison staff, the night nurses knew Tariq and respected him, for he was a positive leader and correctional officers depended on him to be a peacekeeper. When he told the nurses about Gale, they risked their jobs, breaking the rules and allowed him into their offices to use their phone to call Gale. They were able to talk for months, during which he reassured her, offered her healing techniques and clearly played a crucial role in her healing.


When she became well, though she'd be plagued by a lifetime of pain, she married Tariq in a Muslim ceremony in the prison (she’d converted as many women have). With Tariq’s tutelage she became increasingly aware of the injustices of the system, especially for People of Color. Her grandfather was baseball legend, Roy Campanella. She became a passionate advocate for prisoners’ rights and their families, working on the outside while her husband mentored young men on the inside until his death right before I met her. His death from medical neglect only strengthened her passion for justice. Gale’s organization, Women Who Never Give Up, is now a successful agency advocating for justice for the incarcerated and their families and Gale now has a strong statewide and national voice. Presidential candidate, Senator Cory Booker, recently posted “Five Women to Watch in New Jersey", and Gale’s name was at the top of the list. She dreams of someday running for political office.
_____